We did a staff winetasting down at Sansei Waikiki/DK Steakhouse the other night.  The staff wanted to learn a little more about Italian red wines.  Since we had previously tasted some examples produced from Sangiovese, Nebbiolo & Aglianico before, I decided to show them some wines, which were more “country-ish” in style.  Thankfully the wines showed wonderfully.

Sella & Mosca is located near the port of Alghero in the northwest part of the picturesque Isle of Sardegna. They work with only their estate fruit, which in this case is comprised of clay-sand soils. The wine is 100% Cannonau (Grenache), which is aged in large Slavonian for 24 months. Although, this wine too can be delicious like Grenache from other parts of the world, it has a wildly rustic, somewhat masculine personality & firmer structure which works very well with VINO kind of foods.

Frappato is a grape variety indigenous to the Isle of Sicily. Nanfro is located in Catania, a city world renown for their ceramics as well as wine. The vineyard is located at roughly 1200 feet in elevation, comprised of sandy soils with clay & is organically farmed. The locals insist the region’s temperate climate & sandstone terrain create ideal conditions for precious wines with great personalities. This 2011 is juicy, intriguing & rustic yet VERY delicious & gulpable. We have been looking fior a good Frappato for many, many years. Here is the first one to really catch our eye. 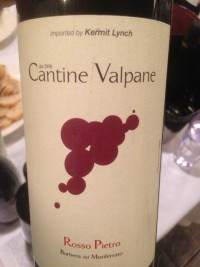 The current owners patriarch, Pietro Giuseppe Arditi purchased this estate in 1902. “Their stately villa at Valpane overlooked one of the most enviable vineyard sites in the Monferrato, a perfect amphitheater that had been planted with vines since at least the 1700s. One day a young man came to the estate and enthusiastically described his dream to buy Valpane and pursue his passion for winegrowing on this exceptional plot of land & is renown for structured, aromatic wines.. Today Pietro runs the estate. “People tell me I’m a great winemaker,” he says, “but the wines of Valpane have been winning awards for well over a century, so it can’t be my doing. I’m just careful not to ruin what the land gives us!”

“Although the names Asti and Alba may be more widely recognized today, Pietro explains that the Monferrato provides more faithful expressions of Barbera. This is due in part to the warmer climate and longer hours of sunlight here, which allow the grapes to ripen completely and unfurl the full personality of the variety. The Monferrato is also still relatively untamed, and the forests and fields here benefit the area’s vineyards by providing a natural source of variety. At Valpane these factors combine to provide meaty Barberas that nevertheless offer plenty of lively fruit. Pietro then lets them sit in large oak botti and cement tanks for several years, depending on the cuvée, and releases them only when they are ready“. 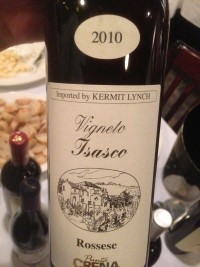 Here is yet another fine example of a TRUE Italian, what I call “country” wine. “The Isasco vineyard sits on a plateau high up in the coastal mountains of Liguria, overlooking the small town of Varigotti and the expansive Mediterranean down below. Thanks to the altitude, the vines benefit from cool nights that allow for slow ripening all the way until harvest in mid-October”. I am told the soil is a red clay. (The rocks in Varigotti have an unusually high aluminum content; as the rock breaks down the aluminum is released and washes into the clay soil, where over several years it oxidizes and turns red. This soil is found only in Varigotti and certain areas of Provence (which is just a few hours away by car)”. The grape variety for this fresh, juicy, surprisingly light & delicious RED wine is Rossese, which this family has been farming since the 1500’s. The Ruffino family & their Punta Crena wines have a real connection with their land, their vines. I believe in addition to terroir, however, their culture & heritage also add to the magic & unique-ness of their wines.

“Spending time in the coastal villages of Liguria—or anywhere in Italy, for that matter—will immediately reveal that life revolves around food. People always seem to be eating, and even while enjoying one meal, you might overhear them planning out the next. Paolo Ruffino, whose family has been growing and vinifying local varietals in Varigotti since around 1500, discloses his philosophy: “I only eat once a day—I start in the morning after I wake up, and I stop before I go to bed.” (No, he’s not fat—on the contrary.) It only follows naturally that the Ruffinos should produce a Rossese that is both thirstquenching and extremely food-friendly. In fact, it’s a challenge for me to imagine a dish that would not pair terrifically with a slightly chilled glass of this delightful red. And if you’re not hungry yet, its buoyancy on the palate and fruity exuberance make it delicious on its own “ . ‘

“The tiny village of Varigotti sits on the Mediterranean, just a few rows of houses and restaurants on a pristine beach, with its back against steep hills. Climb up into the hills and you will discover neatly terraced vineyards on the slopes and in hidden clearings further up on the peaks. The Ruffino family has been tending these vineyards for over 500 years, hardly changing a thing as they pass their knowledge and wisdom from one generation to the next. Ask Paolo if the family follows organic methods in the vineyards and he’ll laugh. We’re not “organic,” he says as if you had asked about some crazy new technology. We just do everything the same way our ancestors have for hundreds of years. They even build their stone terraces by hand, using the method established here three thousand years ago. The vineyards of Punta Crena (which is named for a large promontory jutting into the sea at the edge of the village) are all within 1200 meters of the water and enjoy sea breezes that help keep the grapes healthy and happy. The Ruffinos are proud to work almost exclusively with local varietals, but they don’t have much company. These unpretentious people are firmly rooted in Varigotti, and the wines they craft are infused with local tradition and character”.

“The Riofavara estate is located on the southern tip of Sicily in the Noto Valley, just a few minutes down the road from the town that gave Nero d’Avola its name.  Though the area’s image still suffers in some circles from the historic production of high-alcohol wines that were good only to boost thin wines from the mainland, estates like Riofavara have completely reversed this trend, eliciting vivacious, mineral wines from the zone’s rocky limestone and marl terrains. Named for the Tellaro River, this geological feature known as The Tellaro Formation of the Noto Valley is a layer of active limestone that helps the vines withstand the extreme heat of summer by providing them with a reserve of water.

The Padova family has tended vines here for almost a century, but only in 1993 did they begin bottling their own wine. Their philosophy revolves around two central concepts: Sicilian typicity and the environment. This family is so fervently dedicated to organic production that a few years ago they deemed the official Italian certifying agency too lax and “fired” them, establishing their own stringent standards that demand quality in the finished wine as well as environmentally friendly practices during production“.   Riofavara was also the first producer to dignify this grape with the use of its own indigenous yeasts. 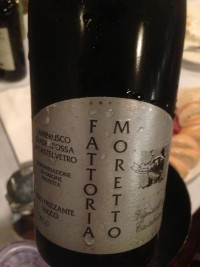 “Moretto is to Lambrusco what Tempier and Terrebrune are to rosé. It reminds me of the best reds of Bandol and Tuscany, with herbs like thyme, and a sort of dusty mineral quality, like you find in some of the top Bordeaux and Tuscan wines.”  Kermit Lynch

“Right from the start Domenico and Albertina worked their vines with entirely natural products and made the most of their excellent vineyard sites. When their sons Fabio and Fausto joined the estate in 1991 the family took another step forward, building a new winery, acquiring another four hectares of vineyards, and finally bottling the wine themselves; and in 1997 their organic status became official. The vineyards of Fattoria Moretto are located in the heart of the hills of Castelvetro, near the famous town of Modena, where a silt and clay soil gives fresh, mineral wines. The Altarivas also choose to highlight the local grape Lambrusco Grasparossa di Castelvetro by vinifying it alone, resulting in an intense, terroir-driven Lambrusco with a nose serious enough for even the most knowledgeable wine connoisseur“.