I first met wife & husband team, Schatzi Throckmorton (whose day job is GM of Behrens/ Erna Schein) & Mike Hirby (then–ass’t winemaker of Behrens/Erna Schein), just as they were ready to launch their Relic label.  These are two incredibly nice people whose true passion for wine is quite contagious.  It was no surprise when their Relic project came to fruition & was deservedly & wonderfully received by the wine media.

“The story of Relic is the story of us: two dreamers following our passion, falling head-over-heels for the epic wines of our times and falling in love with each other. We make wine because we love it and find it mysterious yet deeply satisfying. On the one hand wine provides simple pleasure, something to be shared with friends and family, complementary to a great meal, and on the other hand can be a magnifying glass into the soul of a vineyard site.

We began Relic in 2001 with just a few barrels of Pinot Noir and have since continued to mine history for the old secrets in the making of Rhone varietals, Bordeaux varietals, Pinot Noir and Chardonnay. When we apply these traditional methods to our California climate, we find the resulting wines to be modern and vibrant, yet adamantly more complex and satisfying. Our goal is to make world-class wines that have all of the complexity, aromatics, nuance and concentration that one would expect from some of the best sites in Napa Valley and the Sonoma Coast“.

I am a HUGE fan, as these are VERY interesting, provocative, impeccably made wines that have delicious-ness & balance right out of the gates.  Wines like this don’t just happen.  They are born from interesting & unique vineyard sites & the passion & dedication of a gifted, visionary wine team.  High kudos to Schatzi & Mike! 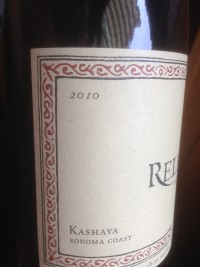 In 2010 Relic produced 2 different Pinot Noirs.  The Kashaya Vineyard is located above the Salt Point State Park out on the true Sonoma Coast, 3 miles from the ocean & above the fogline.  Relic uses 3 clones/selections from here–115, Old Wente & Pommard.  The wine is wild yeast fermented & spends 11 months on the lees.  Like many Sonoma Coast Pinots, this rendition is masculine in style with a good, solid frame & structure.  At the same time, however, there is a real loveliness & deliciousness which separates it from many of its neighbors.  Kudos to Mike & Schatzi on this gorgeous wine!  WOW!

Their Rhone styled blend, which in 2010 was 47% Mourvedre, 21% Carignane, 15% Grenache, 12% Petite Sirah & 5% Syrah.  The grapes for this wine come from 5 vineyards. The Mourvèdre from Juliana’s- organically farmed, small berried clone with yields at 3 tons/acre. Grenache is organically farmed Alban clone from Temple Family Vineyards. Carignane is 110 yrs old from Frediani vineyard, which is adjacent to the iconic Eisele vineyard of Araujo fame (both of Aken soils), which naturally yielded a mere 1 ton per acre. The Petite Sirah is also from Frediani as well & was planted in the 40s. It has always been organic, which is pretty cool.  The Syrah comes from the Farella vineyard down in Coombsville (southern Napa Valley & cooler) & tufa soils.

The Syrah and Carignane are whole-cluster fermented with foot-stomping. The wine is in 50% new French burgundy barrels (Remond & Ermitage cooperages) for 16 months. The wine is racked only once for the assemblage.

I was really fascinated with the 2008 Ritual, as all of its parts are coming together so nicely.  It has alot of flavor, character & gumption while still having fabulous texture & flow on the palate.  I believe the 2010 ups the game even more…..because of its balance, seamless-ness and texture right out of the gates.

Plus…..I admire how Mike Hirby is deftly able to craft such a wine where its sum is better than each part individually.  And using the grapes to do so, rather than depending on scientific/winemaking gimmicks to do the magic.

This is REALLY a winery “under the radar screen” & grossly under rated.  Get it while you can.