There is always quite a bit of discussion on BYOB policies in restaurants, & rightfully so.  As with all such potentially controversial topics…..for me……they just raise questions.

Why do I have to choose a side?  Choosing a side can create polarization.  I am looking for just the opposite–synergy.

Can’t there be a median?  Can’t we look to meet somewhere in the middle? AND…then grow that common ground?

One such effort is what we call the BYOB dinner…..where we come up with a menu (often based upon a wine theme)….complete with wine style recommendations & then invite our regular customers.  We set a price (& ask our regulars to leave a little extra gratuity for the staff).

Yes, we typically do this at our VINO Restaurant….BUT this past Saturday, we did one at our DK Steakhouse for Ed & “the Dead Liver Society”.  Our thought was the dry aged steaks & fixings were ideal for the theme–Cabernet Sauvignon.  Furthermore, it was an opportunity to show our patrons the “Vintage” steaks (no growth hormone, no antibiotics) we use…..as well as…… the difference between dry aged & wet aged steaks (for the main course).

Needless to say, the dinner was a sell out….AND…..there was quite a line-up of Cabernet Sauvignons the participants brought to share. 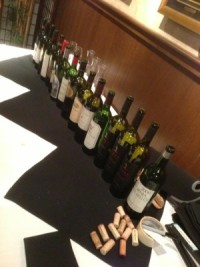 It was nearly an overwhelming line-up of top echelon wines featuring a myriad of different vineyard sites, winemaking skill & different vintages.  The true wine lover would have a field day with such a grouping to say the least.

Eventhough it was a daunting task, I am sure participants each walked away with their list of favorites, with or without the food.  Here are some of those which caught my eye. 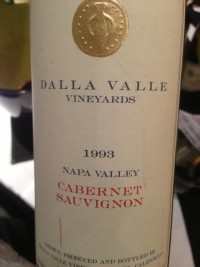 Dalla Valle has been at the top of the Napa Valley marquis list for at least a couple of decades.  Tasting the 1993 (crafted by Heidi Peterson Barrett) side by side with the 1999 (crafted by Mia Klein) also provided additional insight of how talented both are and have been. 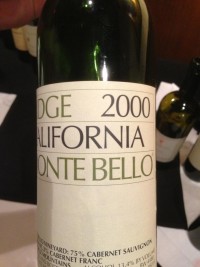 Here is yet another of the iconic Cabernet based red wines out of California.   Monte Bello is high up in the Santa Cruz Mountain appellation.  Yes, it is absolutely breathtaking as it has amazing views of the San Andreas fault , but more importantly it has been the source for some of the most profound, monumental red wines out of California AND for many decades.  The 2000 displayed power, masculinity, impressive depth & “tour de force” character.  The blend was 75% Cabernet Sauvignon, 23% Merlot & 2% Cabernet Franc.   I was surpised at how much American oak it showed on the nose & in the taste on this night.  In looking at the back label, this wine is aged in 90% American oak, which I did not previously know.  Still, this wine was a standout & deserves its high reputation & stature as one of California’s TOP.

Here was a very interesting Napa Valley born Cabernet.  I believe Randy Dunn’s first commercial release was in the late 1970’s.  He has built quite a reputation since for producing very masculine, hard, firmly structured Cabernets from the red volcanic soils of upper Howell Mountain.  It was of great interest then to try one of his wines with 11 years of bottle age.  Not surprisingly, the wine was still very youthful, tight & closed.  Thankfully, I retasted the wine 1 1/2 hour later to find how much it had opened up.  On this night, I found the wine to be provocative, intriguing, masculine/dark/sinister edges but with great depth, character & a far cry from being a “fruit bomb”.  For those that did not go back & retry this wine…..you missed out.  I really liked it & thought it was one of the highlights of the night!

For me, this was the sleeper of the night.  I did not hear too many tasters fawn over it, but for me, I just kept going back & back to it.  Why?  Because it had a lot to say, but much more quietly & intellectually….which are traits that can sometimes take a back seat to power, dramatics & showiness.  The Estate vineyard is the Napanook, one of the original vineyards of the old Inglenook eatate back in its heyday. Under the watchful eye of Bordelais superstar Christian Moueix, Dominus is producing some of the very best Cabernet out of the Napa Valley. 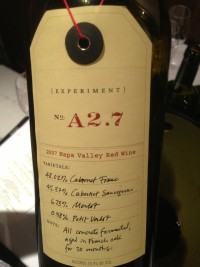 Who brought this wine?  I was surprised to see this bottle on the table.  Ovid is a brand, whose estate vineyard is high up on Pritchard Hill.  We had just spent a few days over on Maui at the 2013 Kapalua Wine & Food Festival with Ovid winemaker Austin Peterson and their superstar consultant Andy Erickson.  There is no doubt, Ovid is primed to be one of the next Napa Valley cult like collectibles.  The wines have amazing depth, character, sophistication & charisma & this wine clearly showed accordingly.  Thanks Pete. 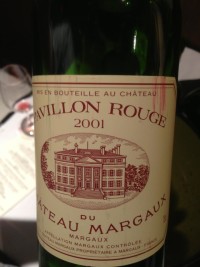 While this may be a second label, this 2001 proved to be one heck’uv a wine.  It was full of class & breed, done with superb elegance, refinement & sophistication.  It seemed everytime I went back to the glass, I encountered something different, as it opened up.  Thank you for letting me experience such a gem.