Here are some wines you might want to check out!

“The vibrant little seaport town of Collioure is nestled on the Mediterranean coast, just north of the Spanish border, in the area known as French Catalonia. In 1981, Vincent Cantié and Christine Campadieu took over two small, family-owned domaines where they had grown up, in Collioure and Banyuls, respectively. Together, they farm vineyards planted on steep, schist terraces overlooking the sea, where they are constantly exposed to the fierce and wily wind known as “La Tramontagne.” This constant wind not only ensures naturally low yields, but also keeps the grapes free of mildew with little need for pesticides or copper sulfate. Their vineyards are so steep that cultivation must be by hand, and extensive irrigation canals and walls (all made from the schist rock) are their only prevention against soil erosion, although there is almost no soil left to recede! These canals snake down the hillsides, separating the parcels. At harvest, the grapes are carried up and down the mountain in baskets. This method of farming, while extremely challenging, preserves the traditions of their ancestors“.

We are HUGE fans of their Collioure still RED wines as well as their Banyul fortified wines.

“They have several single vineyard bottlings of Collioure, and several cuvées of Banyuls, from Christine’s family’s holdings. Banyuls, neighbor of Collioure, sits only two kilometers from the Spanish border; it is famous for its fortified wines. Tour Vieille also produces a wide range of practically extinct late harvest and extended elevage white and red wines, the ultimate meditation wines at the end of a meal. The heart, soul, and hard work that go into crafting these wines make their labor of love all the more delicious“. 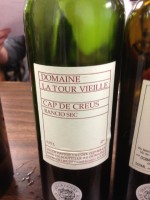 —Banyuls “Vin de Meditation”—Grenache-Carignane, aged in a solera system….the starter being 1952.  Quite an impressive wine!!!!

On this day, we tasted 2 very interesting & unique sparkling wines.  Both also offer stellar quality & tremendous value.  The challenge is learning how to sell them.  As I mentioned though, if one can sell a Californian or Italian bubbly on the floor, then why can’t one sell one of these, especially since the quality is so high?  Is it just because the names are not recognizable?  In my mind, quality should be first & foremost.

—Punta Crena Spumante Brut—this one comes from Liguria, Italy.  The Ruffino family have been growing & producing their Punta Crena wines for over 500 years, mostly on the steep, rocky terraces of Liguria, a mere 1200 meters away from the Sea.  You would think, if their wines were not good, interesting, they would not have been able endure 500 years of selling their wines.  Who would buy them?  AND, if the wines were of low quality, they would have lost their exalted reputation along time ago, right?

These are definitely some of the most interesting indigenous wines from all of Italy.  This sparkler is produced from the Mataossu grape variety.  Where it once was so widely planted, the true Mataossu, today, is grown by only 1 family ….in 1 village (Varigotti).  They have several patches….this particular one is of red, rocky clay…a soil also found in Provence, France.  In both cases, it results In a very interesting terroir character. I don’t exactly know why the Ruffino decided to make this one bubbly….but that they did, via the method champenoise.  What a fabulous combination—a rare, indigenous grape variety, grown in challenging soils, held in place by the vines’ roots & the ancient,  hand built terraces & made bubbly.  The wine smells of the sea, the sun baked rocks & wild shrub surrounding the vineyard—delicious, refreshing, food friendly AND bubbly.  Definitely gets my vote for BEST VALUE!

—Nicole Chanrion Brut Effervescence—Here is yet another VERY unique sparkling wine.  This one comes from Beaujolais down in southern Bungundy. It is 100% Gamay Noir, also produced via method champenoise.  Within the Beaujolais appellation, over the centuries 10 villages were deemed as being Cru (the highest of quality).  Chanrion is located on the Cote de Brouilly, an abrupt volcanic mastiff jutting out in an otherwise series of gently rolling hills.  One of the two leading producers of this appellation is Nicole Chanrion.  To me in addition to brilliance in crafting wines, Nicole seems to have quite an artistic edge to her as well.  For me, then, it was no surprise when I was told of her now producing a sparkling wine.  The grapes are direct pressed, so there is no pink hue evident whatsoever.  I love how rounder & so delicious this bubbly really is.  Makes total sense given Nicole is making the wine.  Well worth checking out!!!!