When I was growing up in this industry, southern France was thought of as producing a sea of mediocre wine.  Then…..later on…. several larger companies looked to take advantage of the ample sunshine to produce value oriented Chardonnay, Cabernet & Merlot in sizable quantities.  Some had succeeded but more have fallen by the wayside.

Now, thankfully, more & more small, adventuresome, passion driven wineries are popping up.  Where many initially planted & worked with Syrah or Grenache, there are more taking advantage of extreme soils & old vine Carignane plantings to produce tasty, interesting, “terroir” driven southern French borne red wines.  Where Syrah & Grenache can dominate a wine’s true character, Carignane in comparison especially like those listed below, can serve as a conduit for the vineyard’s soils & character…..all done with wonderful delicious-ness.  Then by blending in other grape varieties as seasoning, one can end up with a more complete, tasty, interesting, delicious red wine.  Here are 4 standouts for me—1 from California & 3 from southern France.  Hopefully, these 4 will show tasters a whole ‘nother dimension to “rustic” red wines.

A terrific, truly provocative red from California.  The base is Carignane & Mourvedre from 130 plus year old vines out near Oakley, with some Grenache & Syrah added in.  The 2012 is foot stomped, wild yeast fermented & bottled unfiltered & unfined.  One could say, this is a homage to the wines of Maxime Magnon, which I am sure served as an inspiration.  Provocative & absoluteluy delicious! 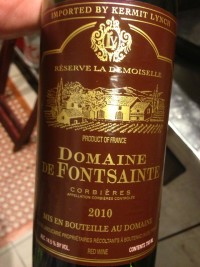 One of the most delicious French “country” red wines, the 2010 is 60% Carignan, 30% Grenache Noir, 10% Mourvèdre.  It is certainly has been one of our absolute favorites over the past 25 years.

“The first vineyards at Domaine de Fontsainte, in the Corbières appellation, were planted by the Romans. The Fontsainte vineyards surround the hamlet of Boutenac in the area known as “The Golden Crescent.” This swath of land is one of the sunniest in the appellation of Corbières, enjoying south-southeast exposure, and protection from the cold, northeast winds by a large 500-hectare forest. The cooler sea breezes from the Mediterranean help this sun-soaked terroirachieve balance as well. Like many of the vignerons that we work with, Bruno believes that “great wines are made in the vineyard” and less in the cellars. He farms the land sustainably and keeps treatments to a minimum. Silica, clay, and limestone dominate the subsoil of Fontsainte’s vineyards. Many of their vines are older, especially the parcel known as La Demoiselle, which recently celebrated its hundredth year”. 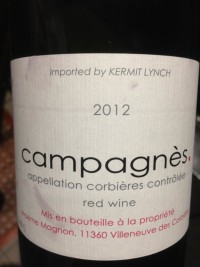 “Maxime Magnon, part of one of France’s most revolutionary wine movements, farms nine parcels over eleven hectares, with steep vineyards that reach high altitudes, and manages it all on his own. Maxime is part of the new wave of passionate viticulteurs who cultivate their vines with the utmost respect for nature and the soil. He’s certified organic, but also incorporates biodynamic practices into his vineyard management.

Most of Maxime’s vineyard land is comprised of schist and limestone subsoils in the sub-appellation Hautes Corbières, bordering Fitou to the South. This is incredibly tough terrain to farm in, as there is virtually no top-soil, just pure rock and garrigue.  Maxime’s tête de cuvé, “Campagnès,” is a single vineyard of the hundred-year-old Carignan, and is the most age-worthy in his line-up. All wines are aged in second-hand, Burgundian barrels sourced from a producer in Chassagne”.

“Domaine Léon Barral is a beacon of revolutionary winegrowing. Didier farms thirty hectares of vineyards, and this is no small feat. Incorporating biodynamic practices into a vineyard means working the soil rigorously, and with so much land to farm, it is fortunate that he has so much help. His workers of choice? A team of twenty cows, horses, and pigs that graze the cover crops in and around the vineyards. The simple act of grazing cultivates healthy microbiotic activity in the soil, bringing mushrooms, ants, ladybugs, earthworms, and other essential life forms, which add important nutrients while aerating the soil. This is the concept of sustainability at its finest, where the ecosystem creates interdependence between the animals and the vineyards.

The grapes benefit the most from this environment, which ultimately translates to tremendously powerful, complex, and age-worthy wines. Most of Didier’s vines get full southern sun exposure. In this Mediterranean climate where summer heat waves and drought are constant during the growing season, pruning in the gobelet style shelters the grapes from the blistering sun. Most of his vines are very old, but vary up to ninety years of age, keeping yields naturally low”.