Not all pink wines are created the same or of equal quality so, there are some good and some not so good. Summer is time for delicious, food friendly pink wines and here are four from around the Mediterranean basin which we feel are well worth checking out! Produced from different grape varieties, grown in different terroirs and microclimates and each are so unique AND really good 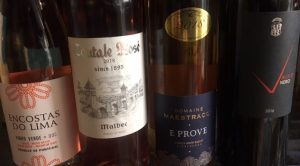 2018 Encostas do Lima Vinho Verde Rosé–A bright eyed and bushy tailed Pinkster from Portugal.  “Vinho Verde country is located in northeastern Portugal and is the largest demarcated wine region in Portugal. Soils are poor with an underlying granite base. The 2018 is 75 % Souazao (a local Port grape), 15 % Borracal (also known as Caiño Tinto), and 10 % Espadeiro (Galician Grape type used for rose wine production, specifically)”.

2018 Clos La Coutale Malbec Rosé—Cahors is a wine appellation in southwest France, which hasn’t changed much in appearance over the years.  “Amidst dramatic rock formations and cliffs, the Lot River slowly snakes its way along the valley floor, coiling covetously around the charming town of Cahors. Cahors is also the birthplace of Cot, the grape more commonly known as Malbec. The Bernède family is an intricate part of this tradition, watching over one of the region’s oldest domaines that was founded before the French Revolution”.  This is the first time we have purchased this wine. It’s time has finally come. 100% Malbec, wild yeast fermented and aged in stainless steel for one month on its fine lees. We love its masculinity, earthy, savory pungency and how delicious it still is.

2018 Maestracci Corse Calvi Rosé “E Prove”–Our wine yoda, Bruce Neyers vehemently recommended to make this stop, not only for the wines, but to walk vineyards and talk story with Camille-Anaïs Raoust, the daughter and winemaker of the estate. He feels she will be an intregal force within the wine scene of Corsica moving forward. Eventhough it was winemaking showtime, having just finished up with harvest when we visited, she graciously and thankfully met up with us. It was a terrific visit and we walked away with a much clearer picture of things to come. Certainly one of our favored stops during our trip to Corsica late last year.

“High in the foothills of Monte Grossu mountain, inland from Calvi, lies the granite plateau of Reginu. The particularity of the plateau is the exposition to hot and dry daytime temperatures with high altitude cool nights, all surrounded on 3 sides by mountains with the fourth, open side a short distance from the sea and regular maritime winds. We were fascinated with the particularity of the terroir and the diverse influence of the temperature variations & granite soils.”

Camille’s wine exhibits wonderful purity of the soils, the microclimate and the surrounding wild countryside. While we have periodically tasted their pink wine over the years, it really has been the past of years, it has really found its stride. The 2018 is 40% each of 45 year old vine Niellucciu and Sciaccarellu (co-planted in clay-sand on granite soils and co-fermented) with 20% Grenache blended in to round out the edges. 90% direct pressed and fermented in stainless steel. We love how masculine savory and tasty it really is. We can readily see the difference that Camille-Anaïs Raoust has made since taking over running the domaine and making the wines.

2016 Abbatucci “Valle di Nero” Rosé–Jean-Charles Abbatucci is the most revered vignerons of Corsica by professionals (local and abroad) AND the winemaking community of the island.   He is fanatically into biodynamic winemaking in a HUGE way. He and his father used to forage the remote hills, fallow vineyards and “peasant” farmers in search of indigenous, nearly forgotten vines. The nearly extinct Carcajolu Neru vine was one of their most significant findings. When his old vines needed to be replaced, Jean-Charles instead, kept the vines’ root systems and grafted on indigenous grape cutting such as Carcajolu Neru. He nows has about two hectares of these vines in the mix. The 2016 is wild yeast fermented, direct pressed, fermented in stainless steel and then aged for six months in large, old demi-muids and only about 50% malolactic done. The production of this masculine, very savory rosé is miniscule since it comes from ½ hectare parcel. Here is your chance to try it! It was one of the finest pink wines of our trip!