I wish I had a dollar for every time some said, “I just love Pinot Noir”. I would be a gazillionaire and happy as a lark. This grape variety is on fire in popularity and I have come to learn that not all Pinots are grown or created the same and thankfully so. Here are four from California that have something very unique to say. Don’t miss out! Opportunities like this don’t come around too often. 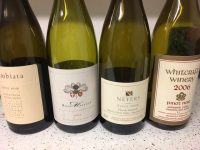 2016 Cambiata Pinot Noir “Santa Lucia Highlands”–I can’t even tell you which Pinot vine this is, as there are no records to be had on the subject. Winemaking prodigy Eric Laumann, had worked with these vines for over twelve years and REALLY liked them and he believes they are at least thirty something years old. There really is no other one like this being produced out of California today. It is transparent, sheer, earthy, stemmy and elusive without any sense of showiness or flamboyancy, like so many of the most acclaimed/fashionable renditions. Nothing tooty fruity here.

2014 Rossi Wallace Pinot Noir “Napa Valley”–Never heard of this Rossi Wallace before? This is a project of mega Cabernet icon/superstar Ric Forman & his wife Cheryl Emmolo. Yup, Pinot Noir grown high up on Atlas Peak. I didn’t even know there was still Pinot planted up there. I checked around and no one seems to know or care what clones/selections they are. They just say they were planted many years ago, like late 80’s, early 90’s. I suspect they are Dijon clones when smelling and tasting the wine. His 2014 received 91 & 92 points from Vinous & Parker.

2017 Neyers Pinot Noir “Placida Vineyard”–What is today referred to as the Swan heritage vine came to the U.S. in the 1940’s, they say by Martin Ray or perhaps in the second wave sometime later—1960’s by Joseph Swan. Regardless who actually brought the plant in, it is a vine, nonetheless that likes to be here and I love how masculine and savory it can be. Placida is predominately Gold Ridge soils and located a short distance from the Swan plantings in the Russian River and overseen by superstar vineyard-ist Chuy Ordaz. It is delicious & lovely in a masculine, savory way.  No one does Pinot like Tadeo Borchardt of Neyers.  No one.

2006 Whitcraft Pinot Noir “Morning Vineyard FI”–Chris Whitcraft was certainly one of the most “out of the box”, idiosyncratic, larger than life personalities of California’s wine scene in the late 80’s to the late mid 2000’s.   He also happened to fashion some of the most monumental, memorable Pinot Noirs of all time, especially from 1992 to 2006. Having been a winemaking disciple of Burt Williams, founding winemaker of Williams & Selyem (one of the very first Pinots out of the state that had an amazing cult like following), Chris followed with similar approaches in the vineyard and the winery. His Pinots were vehemently masculine, savory and surprisingly hearty, especially in their youth. They were continuously critiqued for having flaws and not characteristic of the grape variety. Let’s just say, they were not for everyone’s taste, that’s for sure. I, on the other hand, have had so many memorable bottles—young & old which were so amazing and for so many different reasons. He was the real deal with Pinot Noir. This morning I received an email from his son. It made me reminiscent of the days with Chris and his wines. It also inspired us to showcase some of the very last few bottles we still have from this specially gifted vigneron. Interestingly Morning Dew is a vineyard located up in Anderson Valley, which was owned and planted by Burt Williams (recently sold). In 2006, Whitcraft produced three different bottlings of this vineyard that vintage. Here is one of them., certainly not highly acclaimed or rated. Just plain good, especially now thirteen years old. We serve this wine in homage to our friend, Chris.