Here is an interview we did with legendary Master Sommelier Nunzio Alioto for Wine Speak 2020. 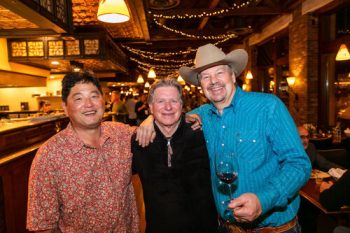 Nunzio has been like an older brother to me & by far, my biggest, most influential mentor.  I am so fortunate to have a life long friend like him.

Indeed, as a boy he helped out at his family’s Alioto’s Restaurant, a San Francisco landmark on Fisherman’s Wharf specializing in fresh seafood and Sicilian family recipes. Nunzio attended cooking schools both in the U.S. & in Lausanne, Switzerland and did apprenticeship stages in the kitchens of several esteemed restaurants including the Iron Horse, Ernie’s (both formerly top, fine dining restaurants in San Francisco) & Jacques Pic (a Michelin 3 star restaurant in Valence, France).   He then became the fourth generation of the Alioto family, to run Alioto’s, one of San Francisco’s oldest family-owned restaurant, until his retirement a couple of years ago.

But Nunzio’s fascination with food and wine did not stop with  his schooling & the family business. At an early age he was already traveling to Burgundy, Bordeaux, Champagne, Alsace, Italy & Germany & was therefore quite versed in each.  Furthermore, living in San Francisco, Nunzio was also very well informed & thoroughly first hand knowledgeable from his continuous visits to the blossoming Sonoma & Napa wine country back in the 1960’s/70’s until even today.

His curiosity, fascination and talent with wine led him to become a Master Sommelier in 1987.

In addition, Nunzio is a former, long time Chairman of the Court of Master Sommeliers–worldwide & was so very instrumental in bringing the program to the prominence it has today.

Nunzio has been a key contributor to Wine Speak since day one. Wine Speak co-founder and Master Sommelier Chuck Furuya recently caught up with him to talk about his journey—and about the wines and people who have inspired him along the way.

What was it about wine which first attracted you?

As I was born into the restaurant business, it was a natural attraction.

What drew you to the wines of the Rhône Valley, Italy, Germany and California in the old days, before it all was fashionable?

Our family restaurant is located in Northern California, and Napa and Sonoma were areas our family visited regularly. Also, Larry Romano, a San Francisco-based wine importer, was a major influence on me. We purchased many of his wine selections which were from around the world.  Because of Larry Romano I had the pleasure of meeting Mr. Alexis Lichine, as Mr. Romano imported wine selections from him. It was these two gentlemen who drew me to these winegrowing regions. Larry Romano also distributed the Robert Mondavi wines in the very early years.

Can you please name a couple of people in wine who truly inspired you over the years and why?

Mr. Lichine, owner of Chateaux Prieure-Lichine, Bordeaux France, and author of the iconic Encyclopedia of Wine)—his general knowledge of French wines, in particular Burgundy and Bordeaux.

Gunter Künstler, Owner of Franz Künstler wines of Germany—His thoughtfulness and his attention to his soils and how they translate into wine.

Dr. Becker of Geisenheim in the Rheingau—His research into clones and rootstock was unparalleled and invigorating.

Chuck Furuya—for his relentless pursuit of knowledge. Keeps the fire burning in me.

Professionally. what advice would you give your younger self?

To immerse myself in Old World wines. In my estimation, that is the basis of understanding wine.

What California wines have you tasted over the years that were truly memorable and why?

1972 Mayacamas Chardonnay: Burgundian in style, a wine that opened my eyes to how good Chardonnay can be from here

What were a few memorable wines from throughout the world and why?

1983 Scharzhofberger Trockenbeerenauslese, Egon Muller: an incredible mind-boggling wine with intensity of mature flavors and a crisp acid balance for such an intense wine

Lastly, what sommeliers have been inspiring to you and why?